Within the altarpiece of the Church of Our Lady in Bruges, Belgium there is a renowned sculpture of the Madonna and Child by Michelangelo.  For two Euros, you may see it for yourself.  One rather remarkable part of this experience is just how cold it is within this marble space, cold enough that you can see your breath on the air, and for the guard stations to be equipped with heat lamps. Yet, this was not my immediate line of thinking.  Nor was it the beauty of the church or Michelangelo’s marble.  In fact, my bizarre train of thought—which I later divided into three interwoven sections—was as follows:

This was immediately followed by a number of quasi-academic inquiries:

When I voiced these sudden and reactionary thoughts out loud, my traveling companion was not altogether impressed by my criticism. She did, however, oblige enough to take a picture.

Later, as we were admiring the chocolate nativity in Burg Square,

just next to the Basilica of the Holy Blood where, twice daily, you can view a reliquary that holds the blood of Christ collected by Joseph of Arimathea at Christ’s crucifixion, it suddenly dawned on me where I might have made the connection between the poor, cold, and uncircumcised Baby Jesus and previous penile confusion.

It all comes back to Michelangelo’s David.  This massive statue of the soon-to-be King of Israel, housed at the end of a long corridor in the Accademia di Belle Arti di Firenze, is renowned for its detailed depiction of the young shepherd as he prepares to take on Goliath.  For centuries, students and artists have studied Michelangelo’s ability to capture in chiseled stone the contours and fluid movement of muscle and tissue. 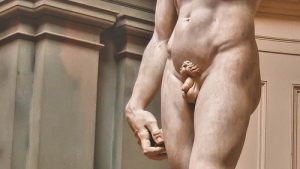 Yet, just like his Baby Jesus in Bruges, there is the obvious—more so, in fact, by mere size—foreskin.  Why is David, the Messiah, the Anointed One, uncircumcised?  Is this not a horrific mistake, an overlooked bit of anatomical inaccuracy?  Does this not, then, cause us to question the validity of Michelangelo’s depiction as nothing more than an incorrect alteration of Biblical ‘fact?’  Perhaps yes and no.

In fact, it seems less a specific amendment to the Biblical depiction of David, and perhaps more a product of Michelangelo’s environment.  The model, after all, was a Florentine youth, which accounts for the haircut and features.  As well, the reigning Catholicism of Michelangelo’s day was less concerned with the rites of circumcision, than of what the story tells us about Christ’s lineage.  For further details, one might peruse some of literature on this subject:

For this post, the point that I’d like to make once more deals with interpretation and ‘fact.’  Clearly, Michelangelo’s depictions of Jewish men are incorrect in that he has failed to represent them as they originally were.  Rather, he has given them his own ‘spin.’  Thus, his interpretations have ‘re-written’ historical details.  That is, if we take these depictions as representative of actual people in actual places at actual times, they are giving us the wrong information which, over time, might shift into being the ‘right’ information as we move further and further away from the context within which they were made.  This depicts a sort of ‘shrinkage,’ the dwindling away of intention coupled with the building up of inaccuracy.  It is in this way also where we, the interpreters of interpretation, begin to re-write history, even if by mistake.

If anything, David’s penis reminds me to proceed with caution, to view these sorts of fictions carefully, and to always be wary of where in these representations the line between fictions made-up and fictions made-from might be blurred.

That, and Happy Christmas.